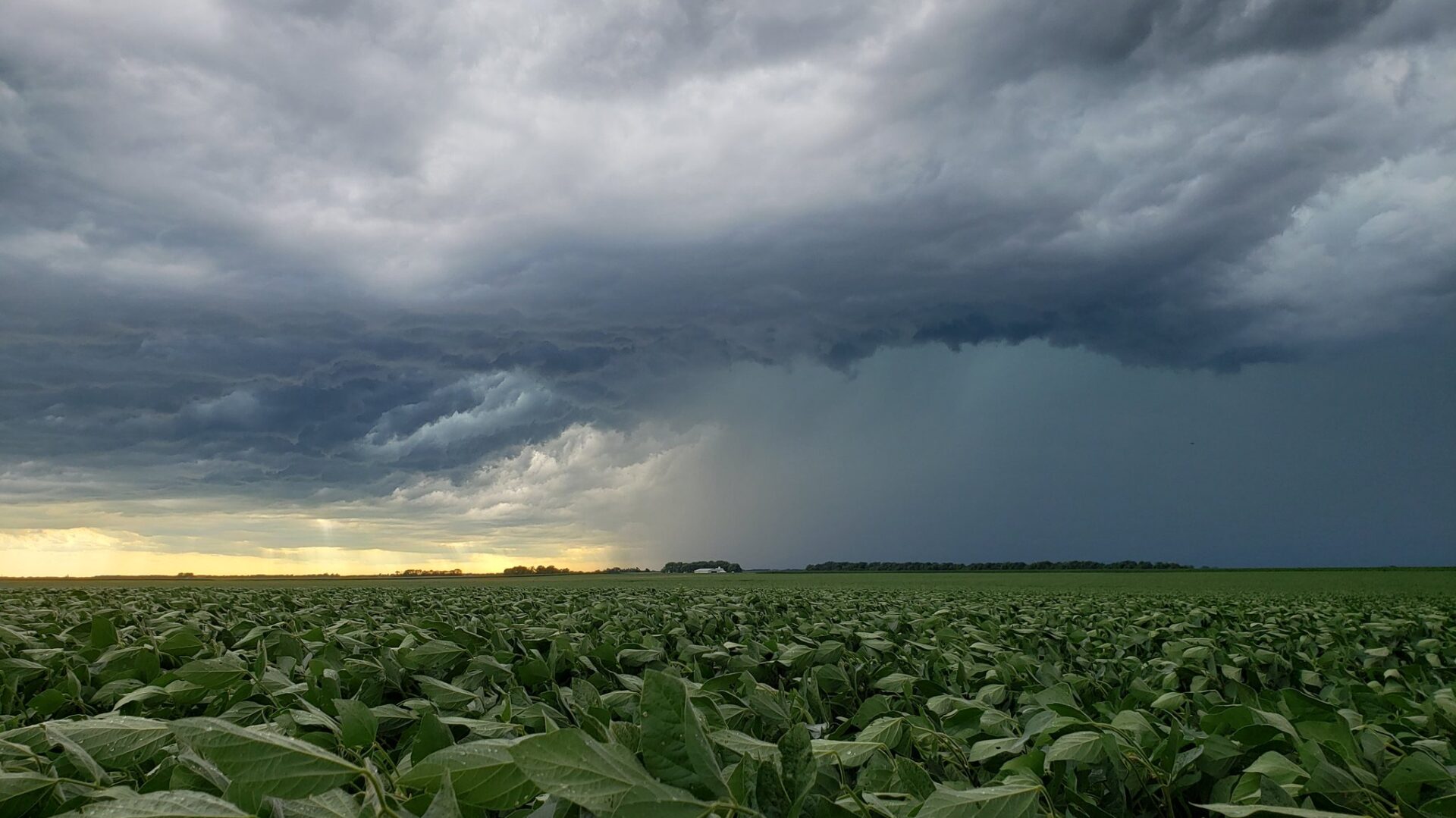 When we first started our investigation, “Flatland” seemed to be a metaphor about the inequities within society and the structural and systematic silencing, or rather flattening, of the voices and concerns of communities. Soon, however, our investigation led us to understand how the metaphor of “flattening” spoke to entrenched issues in our own society, the civilizations and societies before us, and potentially those to come. Reading the novel Flatlands provided an excellent basis for thinking about how society tends to treat those who are at a disadvantage, especially when it comes to devaluing their own personal narratives. Given my past work looking at the oftentimes overlooked narratives and experiences of black and brown individuals throughout several cities, specifically those in heavily segregated communities like Chicago, the notion of flatlands and “flattening” became ever more relevant and worth further analyzing. 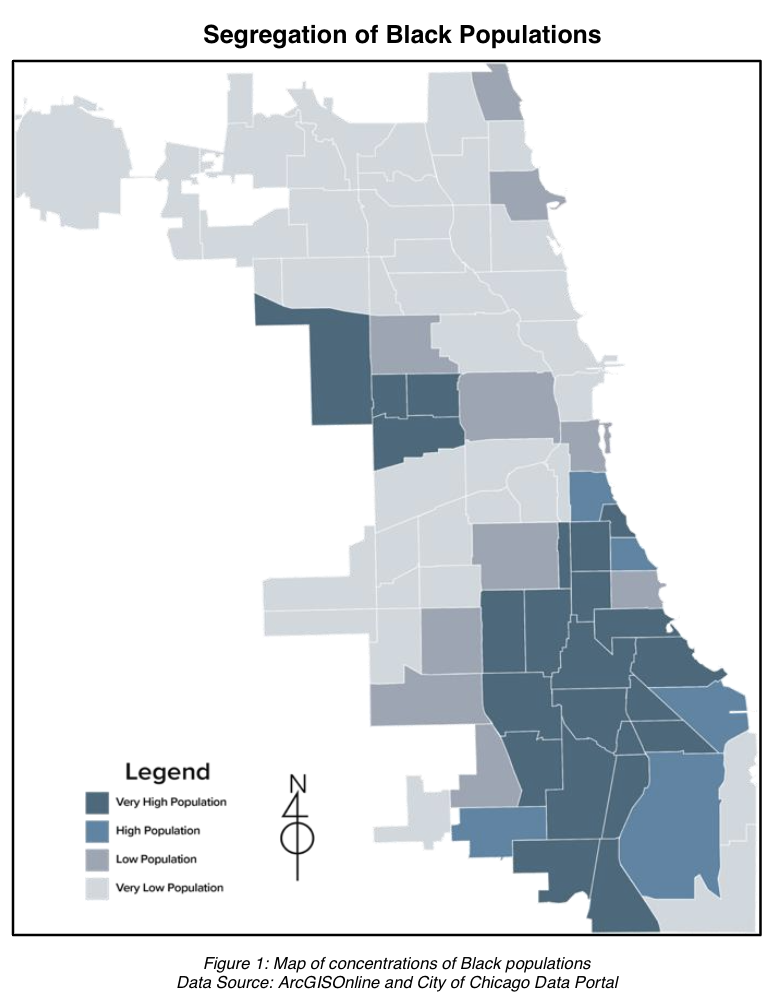 I researched – and deconstructed – narratives about bicycling in Chicago. In my research, I found data and new information on just how deeply rooted the issue of cyclist inequalities in a city like Chicago truly are. For instance, when looking at both cyclist accident data and ticketing/citation data alongside the data of racial and ethnic segregation data, it was alarming, yet at the same time not so shocking, how disproportionately distributed both the appropriate cycling infrastructure (bike lanes, rails-to-trails, etc.) and over-policing of cyclists were in the city. However, before one can dive into the exploration of disparities within Chicago, we must understand the geographic locations in which diverse populations reside in the city.

Figure 1 illustrates the concentration of Chicago’s current Black populations from data provided from the U.S. Census Bureau. Using this data, I calculated the “dissimilarity index” for race in Chicago neighborhoods. The dissimilarity index ranges from 0-1and measures segregation by expressing the proportion of a group that must relocate so that Chicago reaches an even distribution of population by race. According to the established rule of thumb of for an index, anything above 0.6 is considered high dissimilarity (Denton and Massey, 1988). Segregation of African Americans in Chicago should thus be considered quite high with an index of approximately 0.734.

When observing where Latinx communities live in Chicago, they too also reside in specific areas of the City. Using the data from the U.S, Census, the dissimilarity index for Latinx populations is 0.583, which would be considered a moderate measure of dissimilarity according to the Massey and Denton’s rule of thumb. Figure 2 reveals that the high concentrations of Latinx population are in the Northwest, Lower West, and Southwest portions of the city. Given the history of migration of Latinx populations from their home country (Pacyga, 1968), this map follows the historical patterns.

According to the map, however, it is obvious that the amount of community areas highlighted in darker shades are less spatially concentrated in certain parts, specifically the South Side.In other words, Latinx populations have more of a presence in other parts of the North Side of the city compared to African-Americans (as seen in Figure 1). This both attests to the moderate dissimilarity index of Hispanic/Latinx populations and to the fact that these populations have been historically more spread throughout the Northwest and North Side of the city (Padilla, 1947). 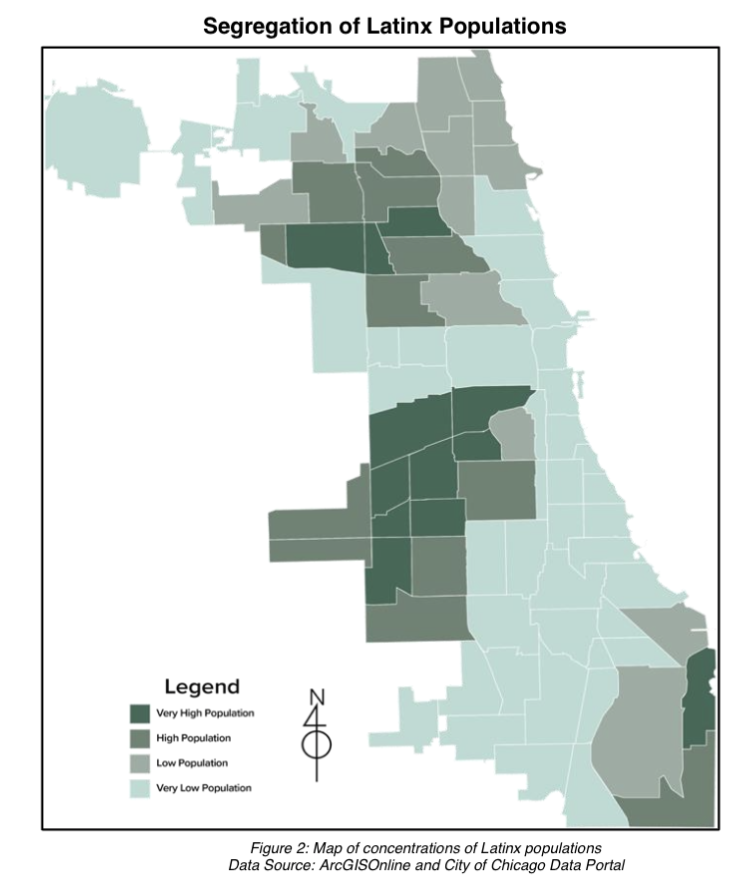 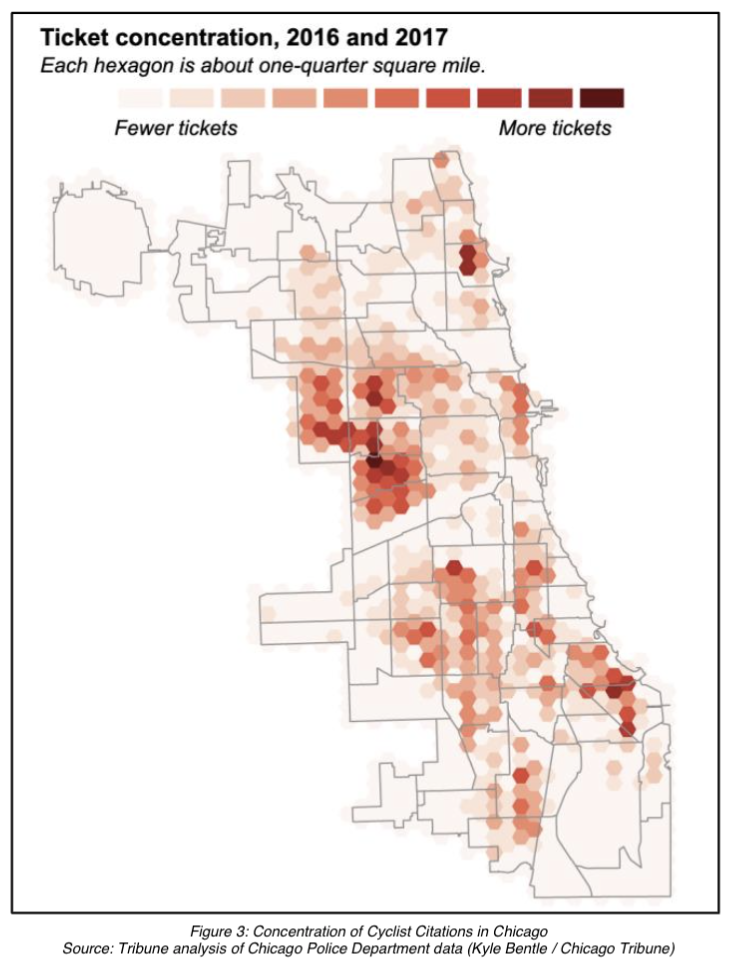 Looking at Figure 1 and 2, the maps clearly illustrate the historical pattern of segregation in which Black and Latinx populations have been particularly concentrated along the West and South Sides of the City. Tying the previous two maps with Figure 3, a pattern of populations that receive the bulk of bicycling tickets transcends past racial lines. These are also areas where, historically, there has been a major lack of investment in biking infrastructure.

We can connect these trends to my research on the cultures of cycling in the city. Popular understanding of “urban bike culture” and cycling in general usually features white-skinned people. Think, for instance, of the archetypal character of the urban hipster, clad in bike courier garb, and riding a stripped down “fixie” bicycle, weaving through traffic in a gentrified neighborhood. While this image is all well and good, it fails to capture the diversity of cycling culture in the city. In particular, the narrative of cyclists in these black and brown communities—as well as their disproportionate harassment by policing while biking—is missing. Perhaps more to the point, it is hidden from the world under the veil of concentrated crime that is manifested from continuous years of disenfranchisement, disinvestment, and more importantly racist policies that plagued these communities.

Despite there being vibrant cycling activity and a culture within the West Side and South Side communities, it does not match the image we think of when we think of “urban cycling.” Relatedly, there is still significantly less infrastructure for cycling in these segregated neighborhoods. Part of the problem is political, but it part of it is also simply about the stories we tell. In sustaining this inaccurate narrative, the true narrative of the need for cycling infrastructure as well as the live experience of living in a racially charged and segregated Chicago is being swept under the rug and thereby flattened.

Another instance where the analytic of flattening truly spoke to me was in an interaction with a member of the Champaign Urbana Habitat for Humanity Chapter, Shelia Dodd. When sitting in her lecture in one of my urban planning courses and discussing with her, I learned an untold story that women in urban and rural areas in various countries have challenges when it comes to homeownership. Dodd mentions how in some of these countries, where gender-based rules restrict the quality of life and liberty of women, there are laws in place that prohibit women from owning property, specifically from owning a home. These laws restrict women, therefore making them ineligible legally to benefit from programs like Habitat. Due to such laws, single mothers in particular can be forced into complex arrangements, effectively owning homes but not the land on which the home is built. I found Dodd’s presentation important to take note of as my future career goals revolve on providing adequate housing as well as increasing equity through cities, to put it generally. The voices of these women are silenced, essentially flattened. 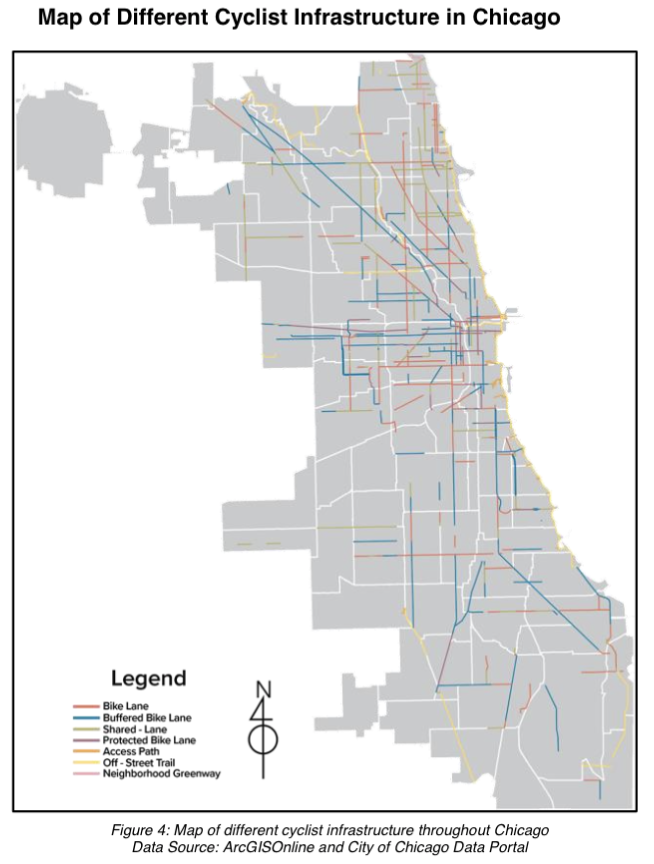 Circumstances and day-to-day experiences such as the two mentioned really begin to beg the basic question of equity, and whether people/planners like myself are either combating these narratives or if we are just further perpetuating these understandings. The two examples mentioned previously from Sheila and my own research remind me how significant it is for all types of planners to have a general, if not proficient, knowledge and understanding of the social complexities in the city so that they can begin to promote positive social changes. Although this may be obvious to many, I believe that a much more complex example such as the one Sheila provided highlights the importance of “unflattening,” or understanding well how a city operates, how its narratives sustain inequalities, and how we need to tell new stories.

Pacyga, Dominic A., and Ellen Skerrett. “LowerWest Side.” In Chicago, City ofNeighborhoods: Histories and Tours. 1986.

check out other contributions to Flatland below