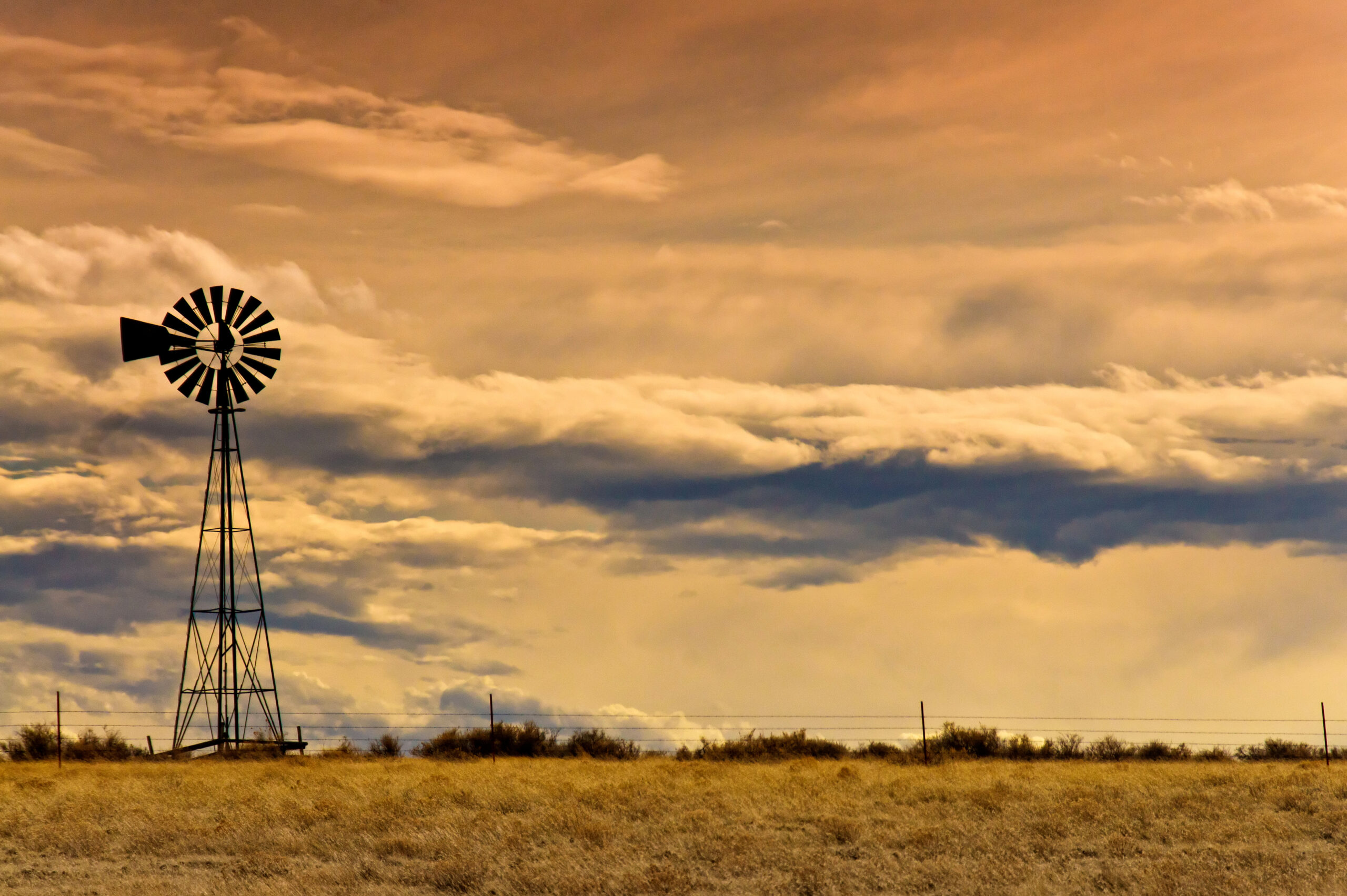 In the mid-1960s the Port Authority of Dade County in southeastern Florida, which includes Miami, began planning a jetport in the Big Cypress Swamp. Located 36 miles west of Miami and six miles from the northernboundary of Everglades National Park, the Big Cypress Swamp sits in Monroe County where 99% of the population lived in the Florida Keys, but the vast majority of the territory is on the mainland. The location was chosen for contrasting reasons: the site offered convenient links to Miami to the east and Naples to the west, but also was far enough away from both cities to avoid any future nuisances that would be caused by supersonic jet technologies that many believed would be widely embraced in the near future. Most notable, perhaps, was the sheer size of the project—larger than the four largest airports in the United States combined with runways long enough for simultaneous take-offs and landings and the ability to accommodate fifty million passengers and one million flights each year. The Port Authority began construction in autumn 1968 for the planned thirty-nine square mile complex—large enough to contain the four largest airports in the United States.Initially conceived as simply a training center, ambitions quickly expanded to include passenger jets, aircraft manufacturing, and a high-speed monorail to provide links to the Gulf and Atlantic coasts. The first runway was already under construction before local environmental activists began to mobilize against the project, arguing that the massive project would result in hugely negative consequences for the fragile ecosystem and wildlife. 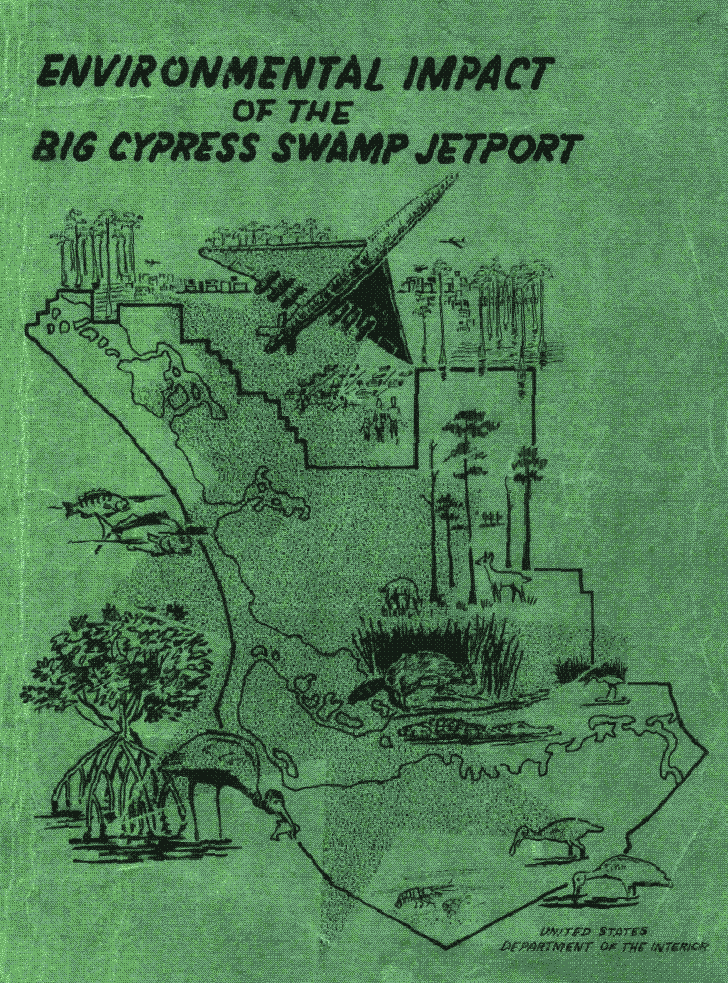 US Department of the Interior Report

In contrast to the environmental activists, supporters of the project concluded that the region’s burgeoning population, need for recreation and leisure (including the intended opening of Disney World in 1971), and rapid increase in air travel necessitated the construction of the jetport. Some local advocates went so far as to claim that the environmentalists who criticized the project were outsiders with little knowledge of local needs. In other cases, the conflict between came to be expressed as a choice between wildlife and human use. Or more specifically, alligators and people, according to a headline of a story published in the St. Petersburg Times on April 28, 1969.

Underlying this attitude is the belief that the swamp was simply an uncharismatic, unusable, unchanging, or worthless space in need of improvement and intervention. The distinction between alligators and people overlooked other approaches to conceiving the relationships between human activities, the landscape, ecological conditions, and wildlife, as well as how they have been presented. At a U.S. Senate committee hearing, Russell Train, then Undersecretary of the Interior in the Nixon Administration, declared that if “ecology teaches us one thing, it is that no part of the environment is so isolated that it can be altered without side effects.” In this context, the Everglades, which was authorized in 1934, but not dedicated until 1947, had the “dubious distinction” of having “the most serious preservation problems facing the National Park Service ... attracting the concern of informed citizens and ecologists throughout the world.”

The Big Cypress Swamp provided water for Everglades National Park and drained through the western portion of the park to the sea. In Train’s description, the Everglades was not simply a standing, wet, and inert body, but a “slow, flat sheet of water” that flowed almost imperceptibly from Lake Okeechobee through Big Cypress and then to the Gulf of Mexico. Over a distance of about one-hundred miles the drop in elevation is 15 feet, so the water drops less than two inches per mile at a rate of 1,000 to 1,500 feet per day. In order to address and visualize the transformation that the jetport would bring to the region, the Department of the Interior employed Luna Leopold, a senior scientist at the U.S. Geological Survey and a son of Aldo Leopold, to examine the prospective consequences of aircraft pollution, urban development, pesticide and fertilizer use, and population growth on Big Cypress and members of the Miccosukee Tribe who lived in the area. The resulting environmental impact report for the Big Cypress Jetport in southern Florida published in September 1969was not meant to make specific recommendations, but rather describe “the anticipated environmental effects at the various levels of development and considers some alternative methods of development which appear to be open.” 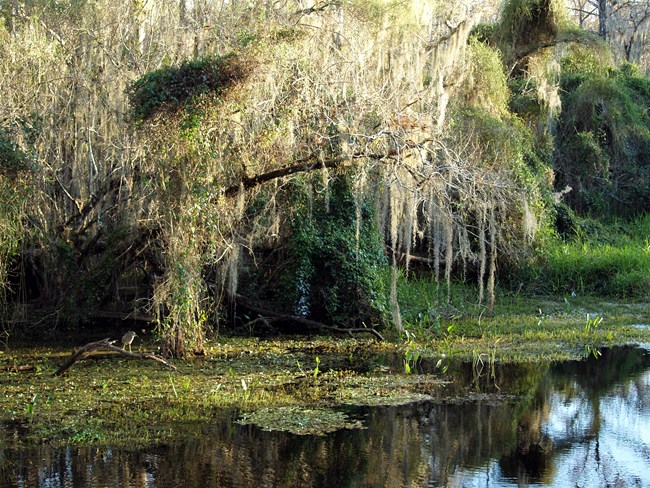 “We cannot emphasize too strongly the ecologic significance of small differences in elevation of land or water in the Everglades,” the authors of the report announced. As a document centered on environmental impacts, “losses and gains to the environment” rather than the economy, as well as “the nature of costs and benefits in terms of the broad and long-lasting environmental effects of the jetport plan” tookprecedence. Hand-drawn maps and diagrams show the region as a dynamic and heterogeneous. A topographic map displays several different types of land formswithin the ostensibly undifferentiated region and directional diagrams present the changes in wild and plant life over a distance of thirty miles. At its core, the report was “designed, hopefully, to point a direction of thinking which might also be used when considering developments of this magnitude in other areas.”While making claims for the particular sensitivities of this part of Florida, these federal government officials also stressed that these issues were typical “of the impingement of technological development on special environmental features.”

check out other Flatland contributions below